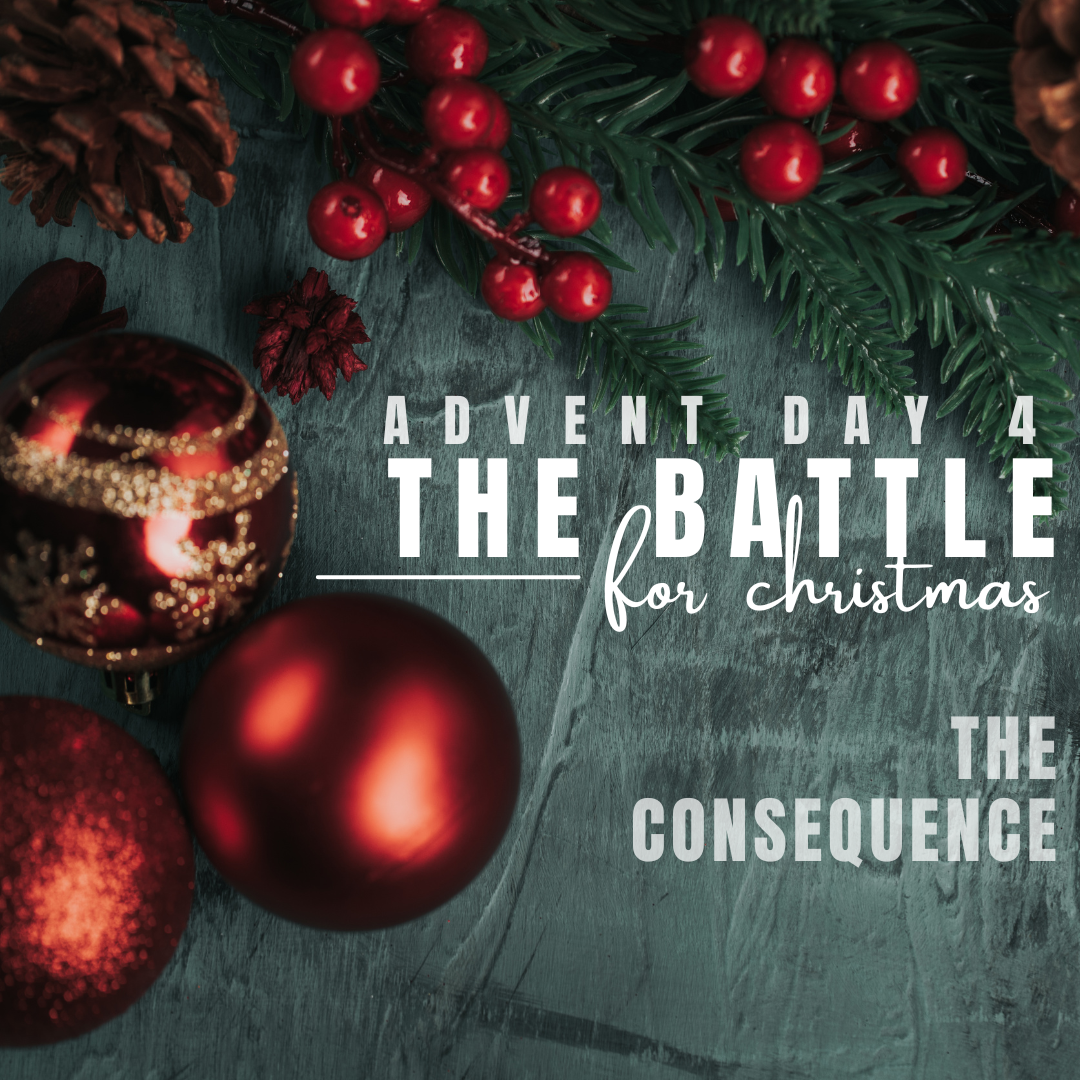 The Battle For Christmas • Advent Day 4

“In the cities of the nations

the Lord your God is giving you

do not leave alive anything that breathes.

The daily taunts of the enemy brought the Israelite camp to their knees. Even the king, who was described as a man, “head and shoulders above the rest,” found himself shrinking in the shadow of this giant.

Was there no one who could meet this neanderthal of a man with confidence? Surely there would be one.

What I find fascinating within this narrative is the location of the enemy during this confrontation. I Samuel 17:1 tells us, “Now the Philistines gathered their forces for war and assembled at Sokoh in Judah.”

IN JUDAH! The enemy had set up camp in the land of promise! The land that belonged to God’s people!

How could they allow this invasion of the enemy in the place that was to be their refuge … their home?

The reason is actually quite simple … the people of God did not obey the command of the LORD when they entered the promised land and hundreds of years later they are feeling the weight of these consequences.

Deuteronomy 20:16-17 gives the command from God, “In the cities of the nations the Lord your God is giving you as an inheritance, do not leave alive anything that breathes. Completely destroy them…”

The directive to destroy the enemy is crystal clear. Yet, the people chose to deal with the enemies in Canaan (the land of promise) in their own way. Joshua 17:13, “However, when the Israelites grew stronger, they subjected the Canaanites to forced labor but did not drive them out completely.”

And now, generations after the conquest of Joshua, the people are suffering from their lack of obedience.

For forty days the enemy continued to ridicule the people, belittling them until surrender seemed the only way out.

Meanwhile across the hill country, a young man is in the field watching sheep and writing songs about the Almighty God!

Psalm 139:3 “You discern my going out and my lying down; you are familiar with all my ways.”

We may not quite understand the significance of these words until this song is placed in context. For it is, then we will recognize the birth of his cry.

David had just been anointed king by Samuel, the priest. Chosen out of twelve brothers, the youngest and most unlikely, rose head and shoulders above the rest. God saw something of greatness within this young man as he would become known as “a man after God’s own heart.”

A brief visit to check on his brothers would lead him to rise up and defeat the enemy that held them captive. You know the story: a boy, a sling, and a stone flung towards the head of the giant which landed him in a heap while the Philistine army ran for cover.

Israel has found victory for the moment and young David finds a place serving the king in the palace.

Fifteen years would pass before David actually took the throne and even then it would take him another seven to gain the confidence of the people in the northern parts of Israel. But eventually David would reign over all of Israel.

The tribe of Judah had taken it’s rightful place as prophesied almost a thousand years before. The battle for Christmas has triumphed and the people rejoiced!