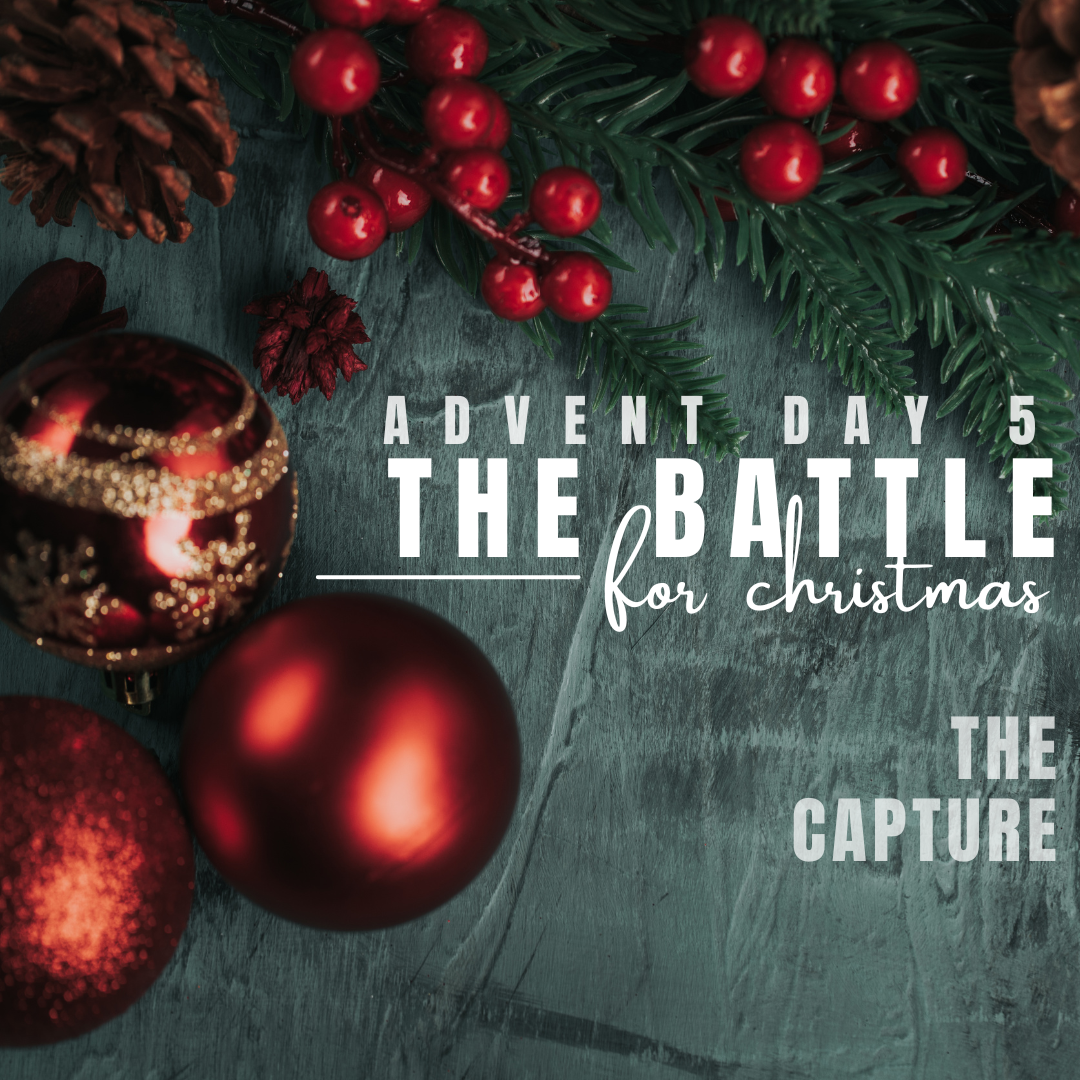 The Battle For Christmas • Advent Day 5

“For I know the plans I have for you,”

“plans to prosper you

and not to harm you,

plans to give you hope and a future.”

Assyria has invaded the northern kingdom and holds them captive.

In the south the story continues. The death of King Josiah launches Judah into her slow decline as she takes a turn from worshipping God which will ultimately lead them into captivity, as well.

The plan to destroy God’s people is working without much effort from the Prince of Darkness. I can only imagine his grimace as the end of Judah’s reign begins to unfold.

Maybe he didn’t realize the prophets had warned the people destruction was near.  Long before God had promised to “[raise] up the Babylonians, that ruthless and impetuous people, who sweep across the whole earth to seize dwellings not their own.” (Habakkuk 1:6)

When Babylon begins to gain power the king of Judah becomes fearful for what could happen to them. Instead of turning to the Most High God for guidance, foreign alliances are made that will soon jeopardize the safety of God’s people and lead them into captivity.

This is where King Zedekiah takes the stage and the throne. While pretending to be loyal to Babylon, he finds a friend in Egypt to wage war against the Babylonians. As Babylon marches to war they are confronted by the Egyptians which causes them to change their battle plan, leaving Jerusalem to attack them instead.

Jeremiah attempts to warn Zedekiah that Babylon will take the city of Jerusalem captive. The only way for Judah to survive would be to give in to their plan so the people will live.

The king chooses not to heed this warning and even attempts to gather the surrounding nations to go up against Babylon once again. These efforts will prove to be in vain for Nebuchadnezzar would send his men to attack and destroy their city.

The fate of Zedekiah was already sealed. Both Jeremiah and Ezekiel prophesied. “You will not escape from his grasp but will surely be captured and given into his hands. You will see the king of Babylon with your own eyes, and he will speak with you face to face. And you will go to Babylon.”( Jeremiah 34:3) “but [You] will not see it, and there [you] will die. (Ezekiel 12:13)

Sure enough the prophecy is fulfilled as the enemy comes to Jerusalem. Then the ultimate capture take place. “[Zedekiah] was taken to the king of Babylon at Riblah, where sentence was pronounced on him.  They killed the sons of Zedekiah before his eyes. Then they put out his eyes, bound him with bronze shackles and took him to Babylon.”  (2 Kings 25:6-7)

With the king blinded and placed in chains and the people taken captive, the army of Babylon launches on their final destructive act: burning the Lord’s temple to the ground and breaking down the walls surrounding the city. The words of the prophets had come to pass for the city lies desolate in a pile of rubble.  The king now understood the warning he received for he would go to Babylon and yet not see the city.

Evil had won! The foundation of the worship of the One True God is destroyed, God’s people are living in exile, and the throne of Judah has been abolished. What a mess God’s people had made of it all.

But God … He delivers a promise to His people to bring hope in their trouble. For in seventy years they would be set free. “For I know the plans I have for you,” declares the Lord, “plans to prosper you and not to harm you, plans to give you hope and a future.” (Jeremiah 29:11)

The battle for Christmas is not over, in fact God is still very much in control and preparing His people even in captivity to carry out His divine plan for victory!